Dr. Waka Kojima, Dr. Koji Yamano and Dr. Noriyuki Matsuda in the Ubiquitin Project discovered mammalian BCAS3-C16orf70 as novel proteins that associate with the autophagosome membranes via interaction with phosphoinositide. These studies were published in Autophagy.

[Graphical Abstract]：
In mammalian cells, BCAS3 and C16orf70 form a complex, and associate with autophagosome formation site via PI3P-binding sites in WD40 domain of BCAS3.

Autophagy is an intracellular degradation process of cytosolic materials and damaged organelles. Researchers at Ubiquitin Project of TMIMS have been studying the molecular mechanism of mitophagy, the selective autophagy process to eliminate damaged mitochondria. PINK1 (a serine/threonine kinase) and Parkin (a ubiquitin ligating enzyme: E3) work together to ubiquitylate the outer membrane proteins of damaged mitochondria, then ubiquitin chains are recognized as signals for autophagy degradation. Dysfunction of mitophagy causes a decrease in mitochondrial quality with overproduction of ROS, and is linked to neurodegenerative diseases like Parkinson's disease.

In Autophagy machinery, cellular components targeted for degradation are engulfed by phosphatidylinositol-3-phosphate(PI3P)-rich membranes. Membranes are elongated and enclosed to form autophagosomes, which then fuse with lysosomes to degrade the cargo inside. Many proteins function in autophagy machinery and they were initially identified by genetic screens in the budding yeast Saccharomyces cerevisiae, and Caenorhabditis elegans. Essential autophagy proteins are evolutionarily conserved from yeast to humans. However, in mammals, there should be unidentified autophagic proteins, and accessory components, whose single gene deletions only manifest as mild defects in autophagy activity, might be missed by these types of genetic screens. 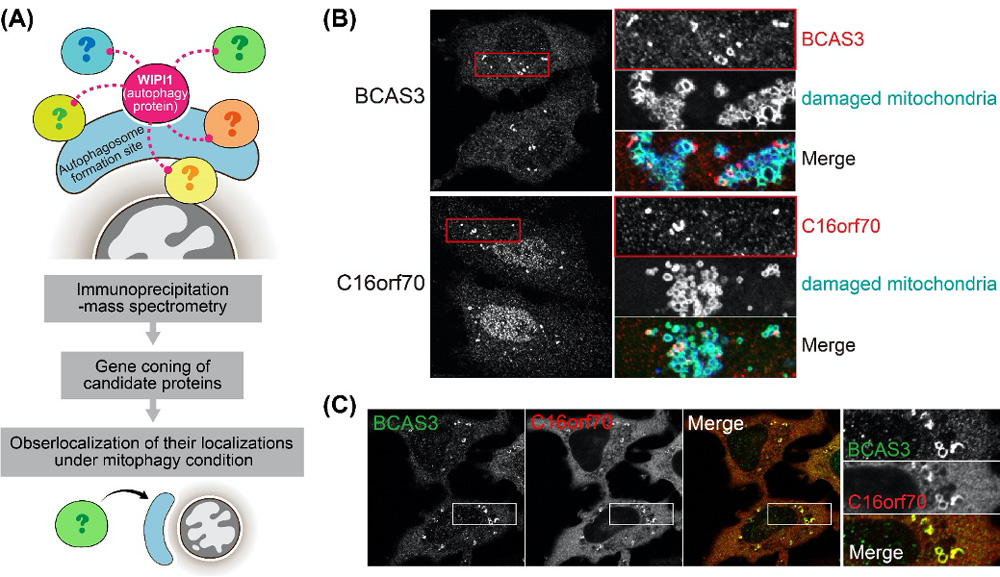 Autophagy efficiencies in response to mitochondrial damage and amino-acid starvation were not affected by BCAS3 and/or C16orf70 gene deletions at least in cultured cells. On the other hand, overexpression of the BCAS3-C16orf70 complex impairs the assembly of several autophagy core proteins. These findings demonstrate important accessory functions of BCAS3 and C16orf70 in autophagy machinery.

Furthermore, in silico structural modeling of BCAS3 followed by mutational analyses in immunocytochemistry and in vitro phosphoinositide-binding assays indicate that BCAS3 directly binds phosphatidylinositol-3-phosphate on the autophagosome membranes.