Elucidation of the mechanism how chemokines/DNA complex activates innate immunity

Stem cell project in our institute revealed the mechanism of activation of innate immunity by chemokine/DNA complex. This work was done by collaboration with the University of Tokushima. We published it in the American scientific journal.

Chemokines (Note 1) are secretory proteins that promote cell migration and are known to contribute to inflammatory reactions by attracting leukocytes. In addition to the general function of chemokines, a study by our stem cell project in 2017 revealed that CXCL14, a type of chemokine, binds to a DNA sequence that is abundant in bacterial DNA called CpG DNA (Note 2). CXCL14/CpG DNA complex facilitates uptake into dendritic cells (Note 3), and significantly enhances the inflammatory response. As the results, we discovered a new function that induces innate immunity (Note 4). However,it remained unclear whether this function was common to chemokines and by what mechanism the uptake enhancement occurred.

In this study, it was clarified that CXCL4, which is the same CXC type chemokine as CXCL14, has the same function as CXCL14 and enhances the activation of dendritic cells by CpG DNA. In addition, CXCL14 has both CpG DNA and a binding domain to cell surface receptors, and the CXCL14 / CpG DNA complex is incorporated into dendritic cells by the clathrin-dependent endocytosis pathway (Fig.1). In addition, the binding of CXCL14 / CpG DNA was analyzed by simulation, and it was shown that multiple amino acids on the N-terminal side and C-terminal side of CXCL14 work cooperatively to stabilize the binding (Fig. 2). These results revealed the non-classical function of chemokines to activate innate immunity by binding to CpG DNA.

Fig.1 Mechanism of innate immune activation of CXCL14 and CpG DNA
CXCL14 has both CpG DNA and a binding domain to the cell surface receptor. The CXCL14 / CpG DNA complex is endocytosed into dendritic cells to activate the CpG DNA receptor Toll-like receptor 9 (TLR9). 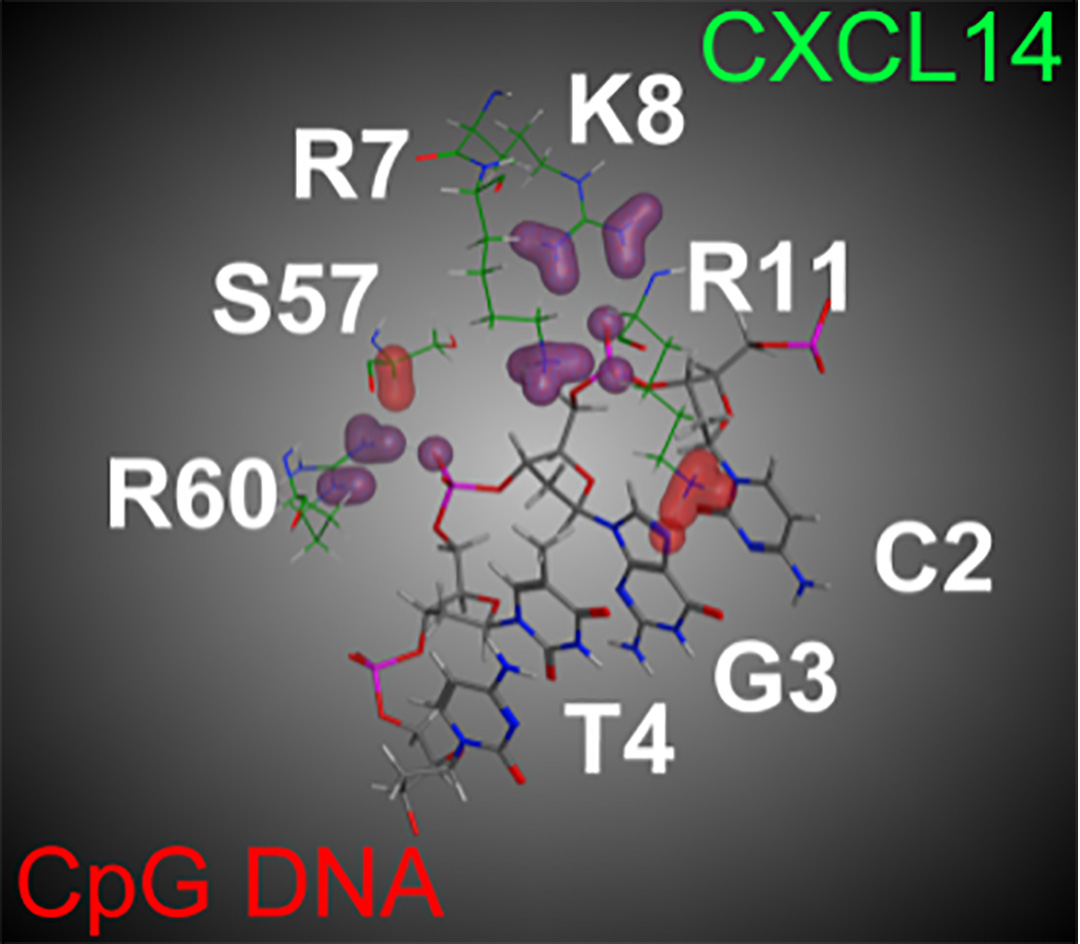 (Note 1) Chemokine:
A basic protein with a small molecular weight (8-10 kDa) that induces leukocyte migration. More than 50 types of chemokine molecules have been reported.
(Note 2) CpG DNA:
Unmethylated DNA having a continuous sequence of cytosine and guanine. CpG sequences are often methylated in mammals, whereas unmethylated CpG sequences are abundantly found in bacteria and viruses. Unmethylated CpG DNA activates intracellular Toll-like receptors 9 to provoke various immune responses.
(Note 3) Dendritic cells:
Immune Cells that take up pathogens and present their antigens to T cells by processing the proteins. When activated, it expresses various cytokines and growth factors that enhance the immune response.
(Note 4) Innate immunity:
A mechanism that activates the immune response by recognizing molecules characteristic of pathogens. At present, it has been clarified that the activation of innate immunity triggers the activation of acquired immunity such as antibody production. In this study, we focus on the mechanism by which Toll-like receptor 9 recognizes unmethylated CpG DNA characteristic of bacteria.

It was supported by the Japan Society for the Promotion of Science (JSPS) Grant-in-Aid for Scientific Research.