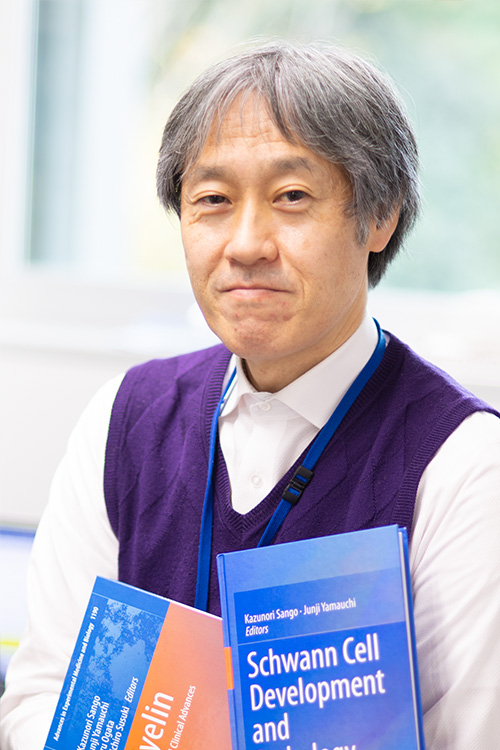 After graduation from Yokohama City University School of Medicine in 1988, Kazunori Sango worked at Yokohama City University Hospital as a physician and saw many patients suffering from diabetic neuropathy and other complications. Inspired by that experience, he started to study the pathogenesis of diabetic neuropathy at Department of Physiology, Yokohama City University as a graduate student. He received Ph.D in 1992, and continued to work on pathogenic mechanisms of diabetic neuropathy and other neurodegenerative disorders at National Institutes of Health, USA (1993-1996), National Institute of Health and Nutrition, Japan (1996-1999), Tokyo Metropolitan Institute of Neuroscience (1999-2011), and Tokyo Metropolitan Institute of Medical Science (2011-). He has been the leader of the Diabetic Neuropathy Project since 2015, and his current interest is therapeutic approaches focusing on the cross-talks among the pathogenic factors of diabetic neuropathy, in particular, collateral glycolysis pathways, glycation and oxidative stress.

The increase of the number of diabetics has led to specific chronic complications for which countermeasures are urgently needed. Diabetic neuropathy is the complication that occurs with the greatest frequency, and its irritating symptoms such as pain and numbness can be the cause of insomnia and depression, and when allowed to progress to more advanced disease stages can result in serious consequences such as lower limb amputation and lethal arrhythmia.

In this project, we contribute to improving QOL for diabetics and helping them to live longer lives by clarifying the pathogenesis of neurological disorders and establishing effective treatments.